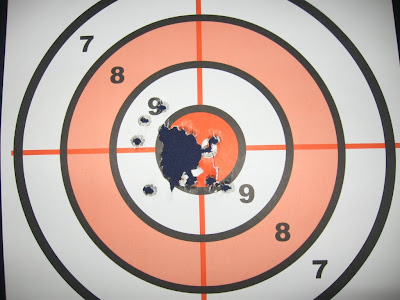 About time I put something in my blog :-) Not that I have not been doing anything, just that I have been doing a lot. Today was my scheduled shooting practice day at Shootstraight in Apopka. I am a member, so I try to get there at least once a week. I bring along 100 rounds of .22 long rifle for the Ruger. I got a Red Dot sight for it, and am still tweaking and adjusting it. I like the .22 for cheap; $12 for 550 bulk rounds at Walmart.

The target above is with the fun, a lot louder, more kick, Glock 9mm. About 20 feet away 20 rounds. It is kind of hard to judge the actual distance, as there are only some numbers on the wall: 7, 15, 20 yards. Either the Glock is getting broken in, or I am improving, or both. I'll have to try adjusting the sight a bit, as it is off to the left a bit. The 9mm rounds are about twice the cost of the .22, so I only shoot half as many.

When Justin gets out of school, AND if he has good grades, then I will take him with me. But first we have to do a lot of dry firing and going over the 4 basic laws/rules:


The 1st Law of Gun Safety - The Gun Is Always Loaded!

*All firearms are loaded. - There are no exceptions. Don't pretend that this is true. Know that it is and handle all firearms accordingly. Do not believe it when someone says: "It isn't loaded."

The 2nd Law of Gun Safety - Never Point A Gun At Something You're Not Prepared To Destroy!

*Never let the muzzle of a firearm point at anything you are not willing to destroy. - If you would not want to see a bullet hole in it do not allow a firearm's muzzle to point at it.

The 3rd Law of Gun Safety - Always Be Sure Of Your Target And What Is Behind It!

The 4th Law of Gun Safety - Keep Your Finger Off The Trigger Until Your Sights Are On The Target!

Sure, there are a lot more rules like keeping your ammunition dry, clean weapon, no obstructions in the barrel, etc. But none are as important as the above 4.
Posted by PiTo at 17:29 No comments: